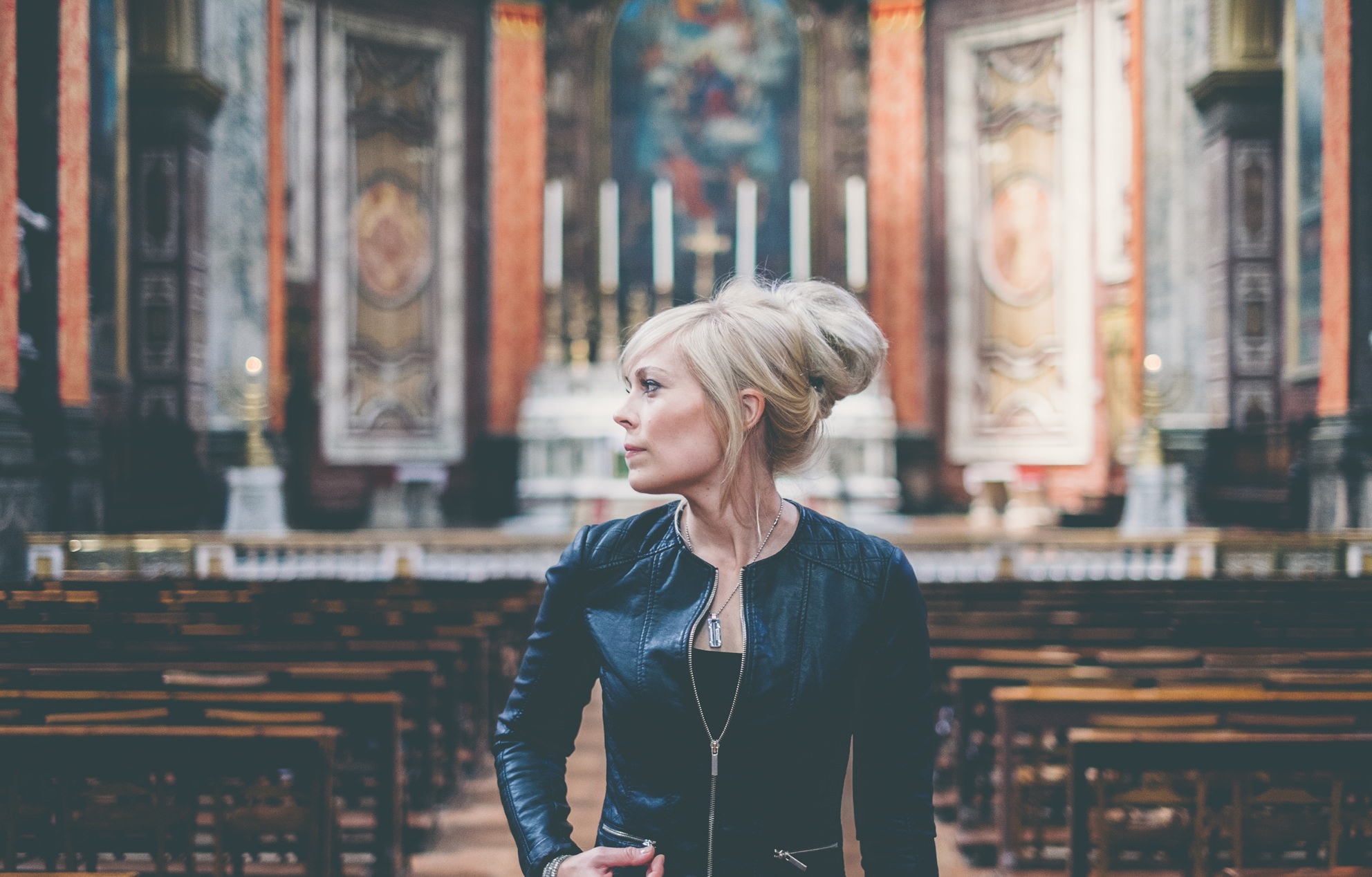 Vicky’s Oxford degrees are in theology; the study of religion and ethics.

Her areas of special interest are the intersection between religion and technology, the role of women in religion, the Christian faith and general ethics. She is regularly asked to contribute to the media on such issues.

Vicky gave live commentary on the latest women bishops vote outside Synod in November 2013 for Sky News and BBC News, she gave live commentary on LBC Radio when Pope Francis was announced, she has spoken out strongly in favour of the fight for equal marriage within the Church of England, she gave comment on the appointment of Justin Welby as the new Archbishop of Canterbury, and has been interviewed on numerous other religious stories.

She is a Thought For The Day contributor on Radio 4’s Today programme. She also co-runs the ‘Yes2WomenBishops’ social media campaign, featured in the Guardian and Telegraph.

Vicky has written on religious matters for The Independent, The Guardian, The Church Times, BBC Religion & Ethics Online, and other publications.

She is a popular contributor at events and conferences, having spoken at Oxford University, Durham University, the Conservatory in Toronto and at the Californian Prayer Breakfast alongside Governor Arnold Schwartzenegger.

As an open-minded person of faith, Vicky’s goal is to make religion and ethics interesting and vibrant to those who might consider it dull or outdated. Her feminist viewpoint and passion for technology bring an interesting dimension to the way she views spirituality.

Vicky was a guest on Sunday Morning Live, an ethical debate show broadcast live from BBC studios in Belfast.

She discussed ‘women bishops’, tackling arguments from Suzie Leafe (Director of REFORM, a prominent anti-women-in-Church-leadership organisation) and Angela Epstein (a self-declared ‘non feminist’, believing women’s roles within religion should be subservient to men and not involve spiritual leadership). Poet and activist Benjamin Zephaniah was also a panellist and agreed with Vicky that women’s roles within religion should not be restricted on the basis of gender.

You can watch the clip here: 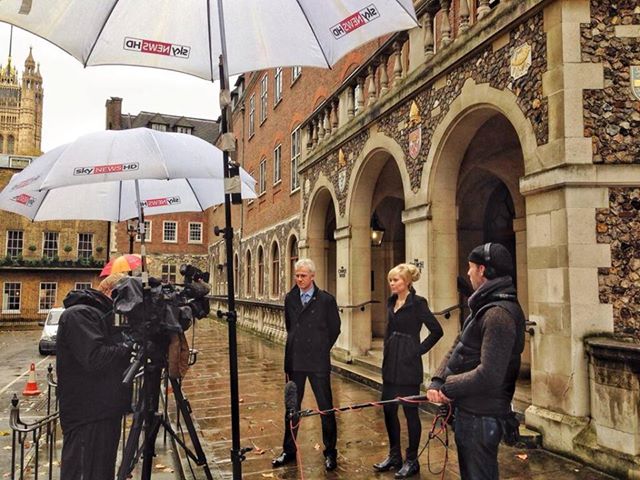 Vicky gave live interviews outside Church House on the developing story of the vote on women bishops legislation.

As the news of the vote broke, Vicky spoke live on both Sky News and the BBC News Channel, as well as various European networks, giving reflections on what the vote meant and on the mechanics of Church Synod and the theology of women bishops.

One clip of a BBC interview was featured on the BBC News homepage today. You can watch it here.

Photos from the day of filming are below. 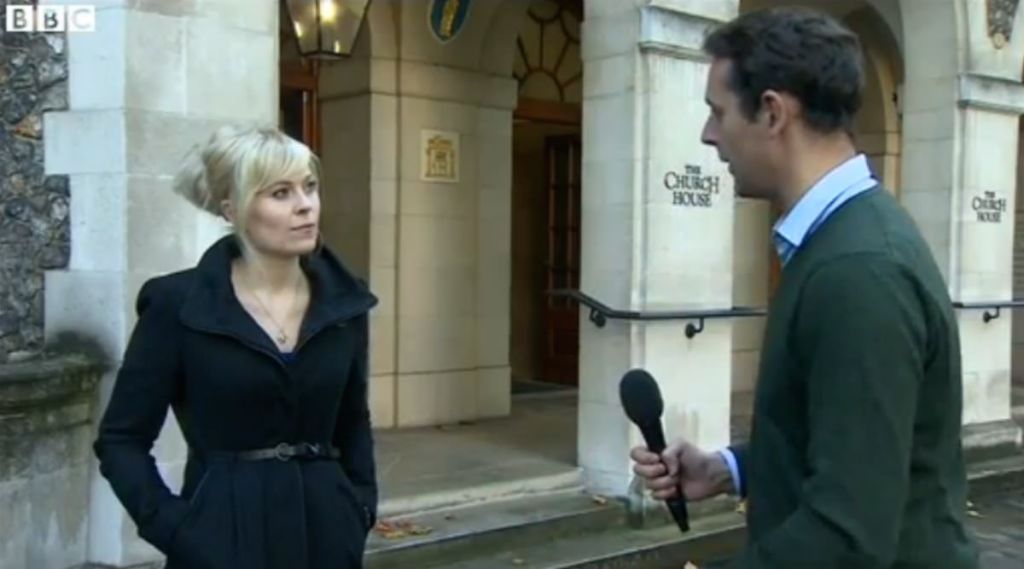 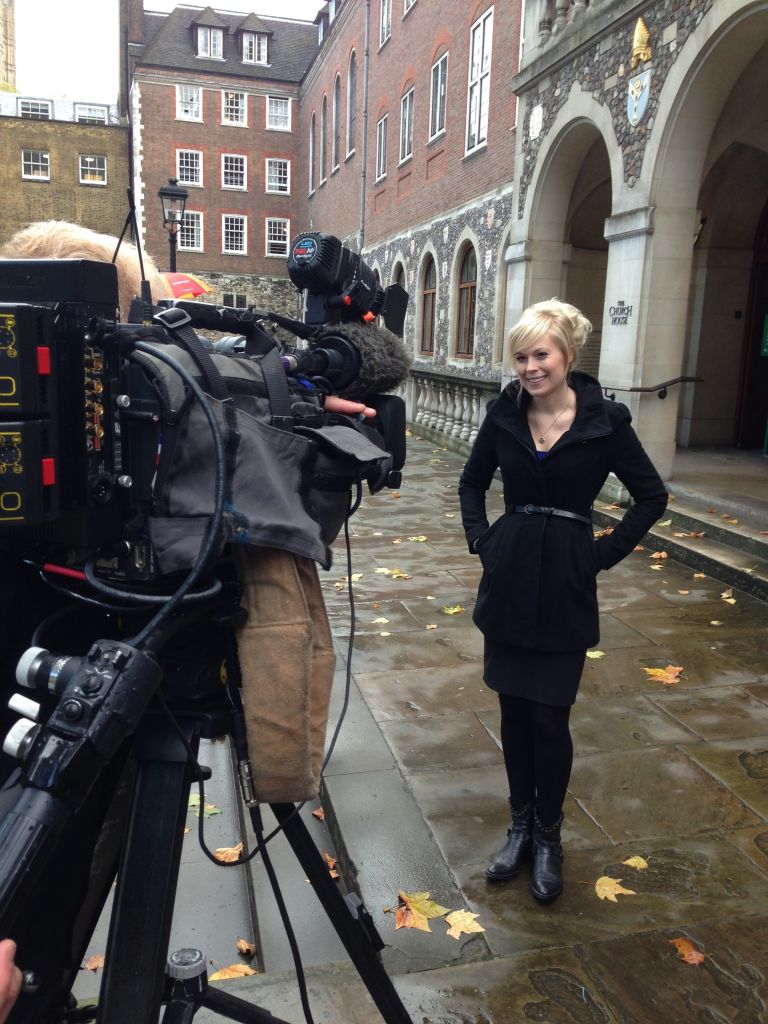 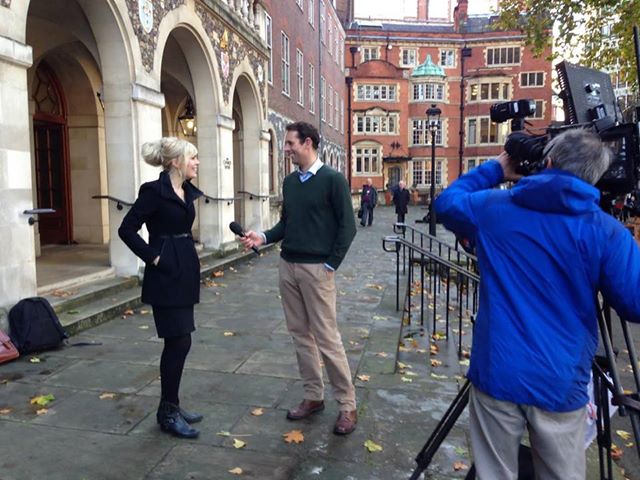 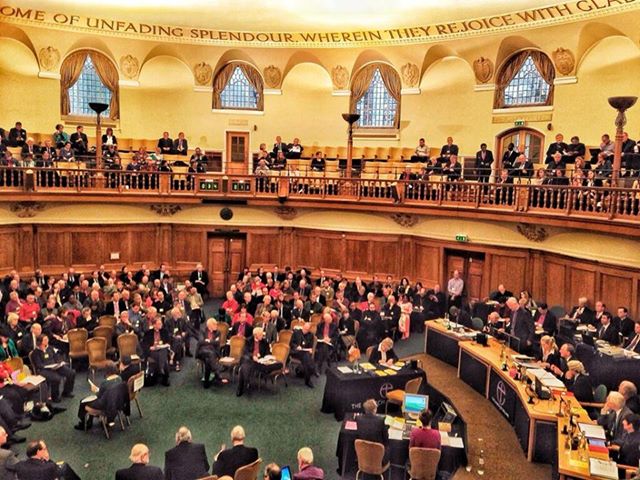 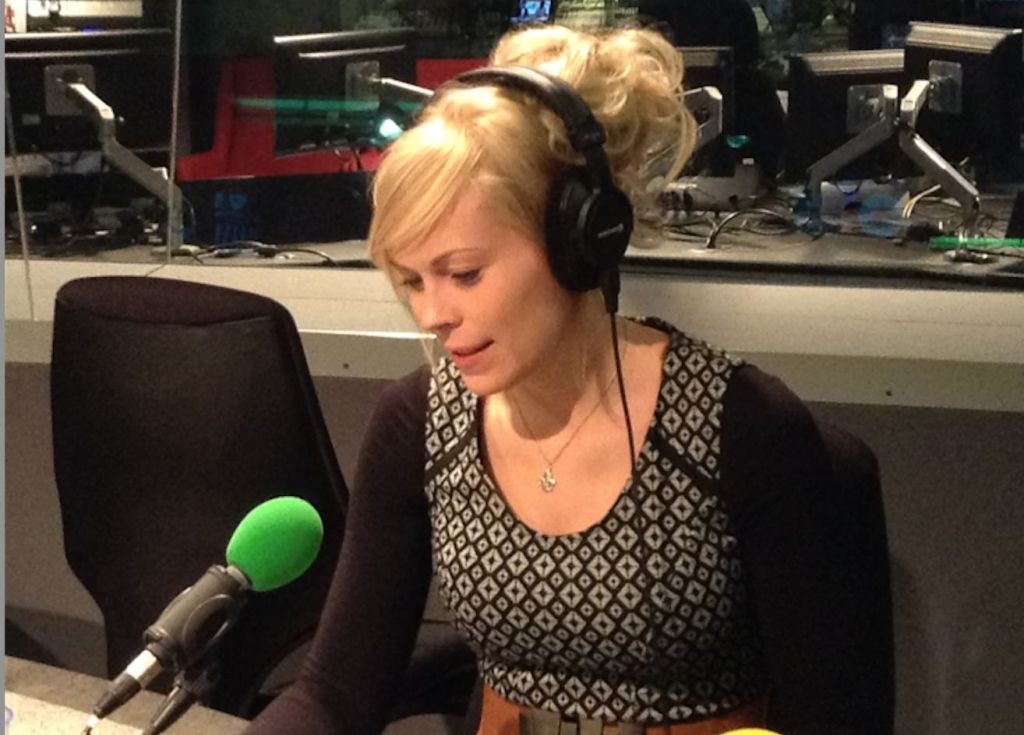 Thought For The Day

Vicky was part of the Radio 4’s Today programme, broadcasting their Thought For The Day.

This slot is a daily reflection on a spiritual theme and happens each morning at 7.45am.

Vicky spoke about vulnerability, reflecting on the writings of Catholic priest Henri Nouwen.

You can hear it below: 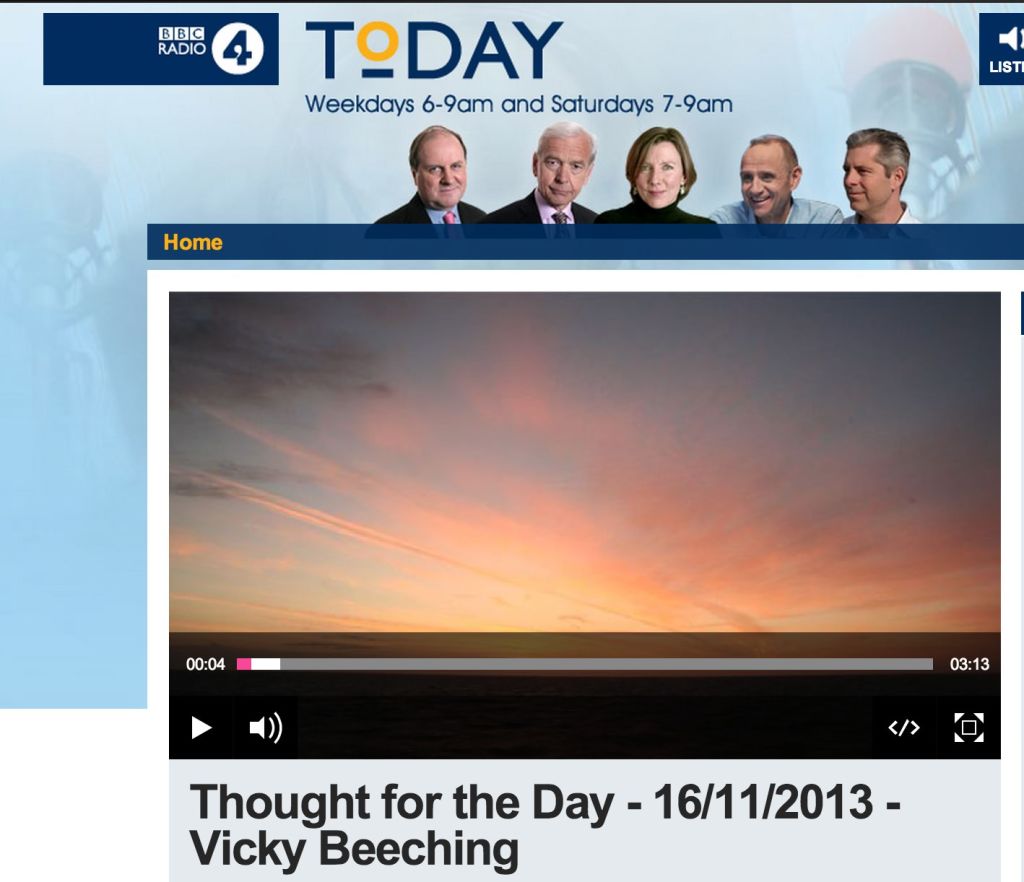 Listen to Thought for the Day (16th November 2013) or click the image. 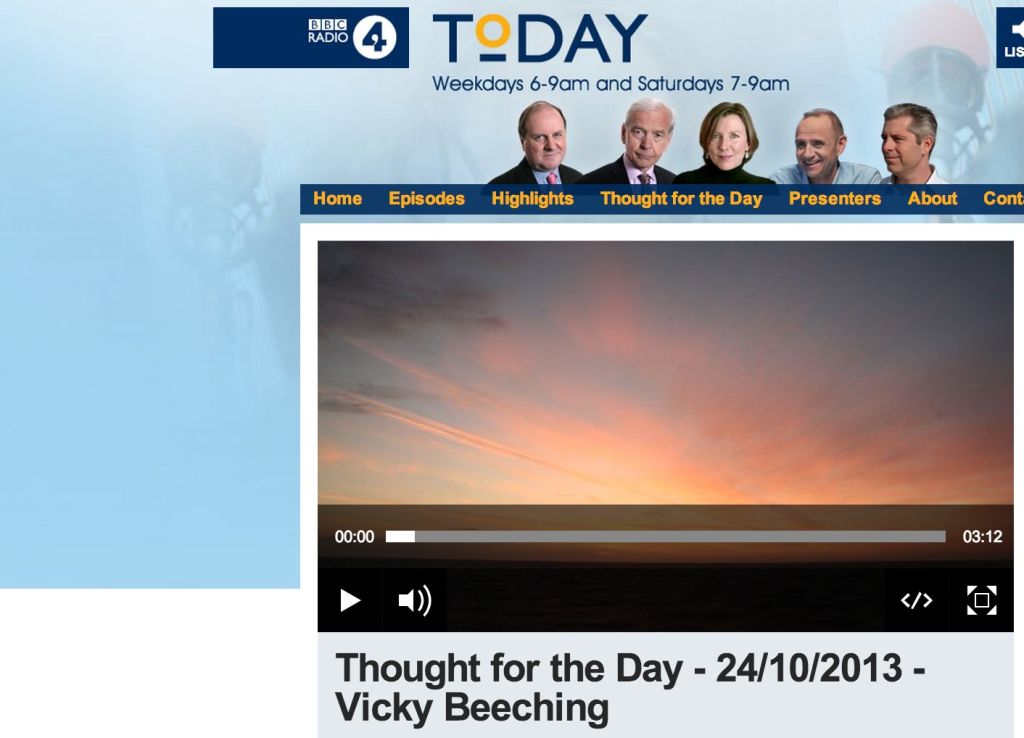 Vicky is the newest member of the Thought For The Day team – a religion and ethics slot at 7.45am on each of the Today programme’s broadcasts.

She themed her first ‘Thought’ on her involvement in a feminism campaign and her academic research into the ethics of technology.

Listen to the Thought for the Day (24th October 2013) or click the image above. 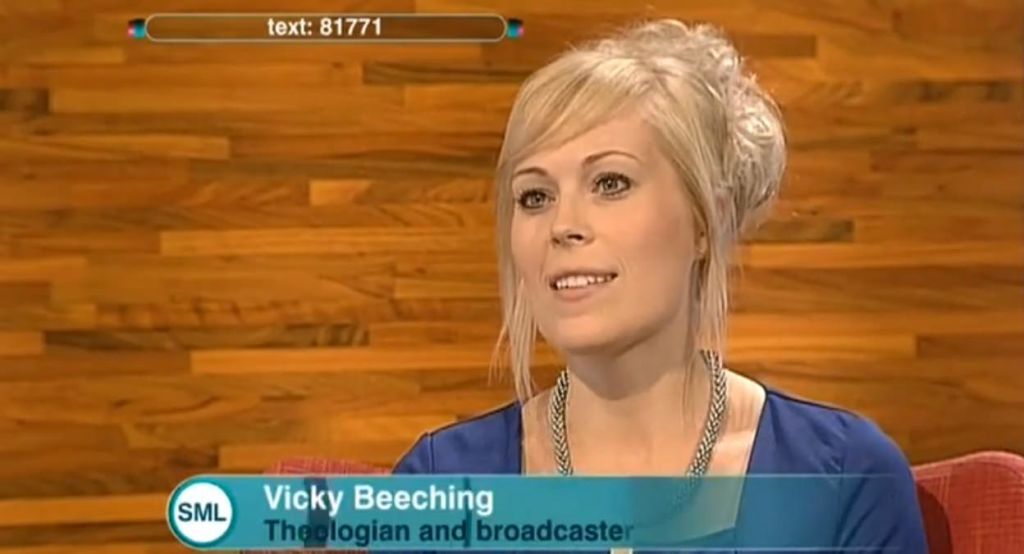 Hosted by Samira Ahmed, Vicky and other guests discussed the ethics of GM food, the question of whether footballers should be role models and whether charity bosses are paid too much.

You can watch each of the three debates below:

Part 1: “Has science gone too far with GM food?”

Part 2: Should footballers be role models?

Part 3: Are charities bosses paid too much? 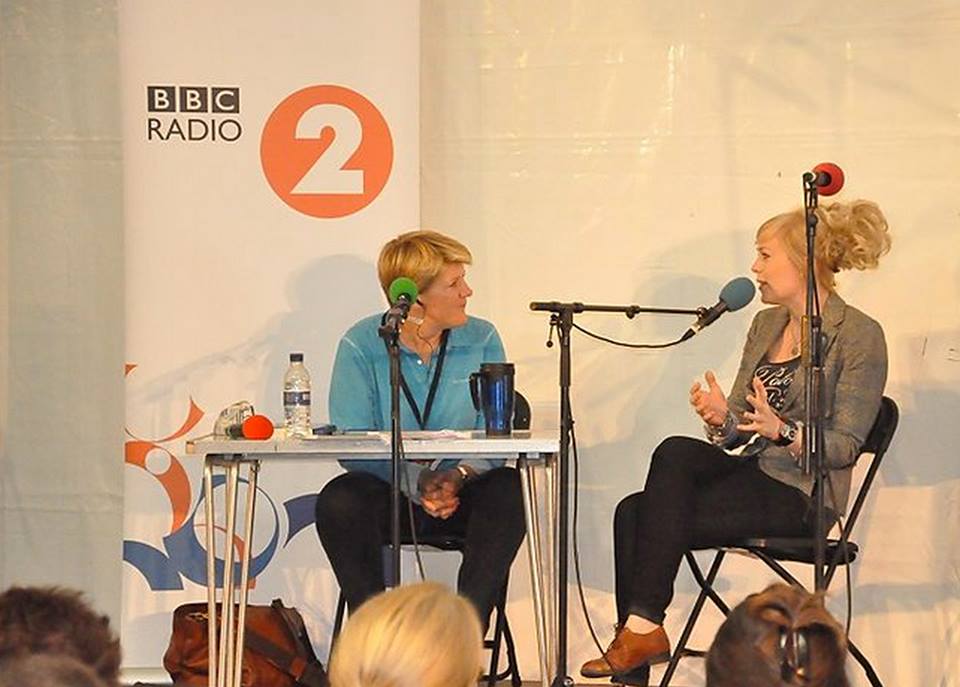 Vicky was one of three guests on the show who chatted with Clare about life and faith. The other guests were advisor to the White House, Jim Wallis and priest and broadcaster Rev. Richard Coles.

Vicky and Clare discussed technology, spirituality and the problems of Twitter trolling. They recorded the programme with a live audience at the Cheltenham race course. 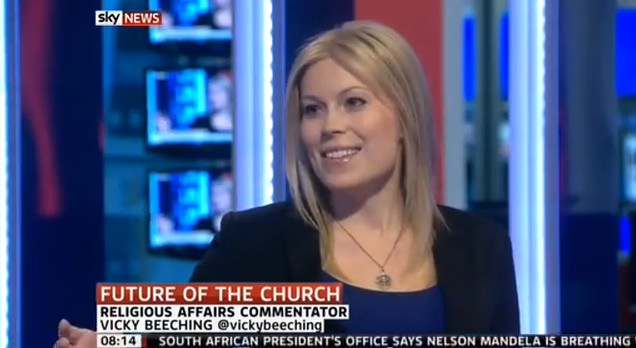 Vicky was interviewed on Sky News about the future of the church. The new Archbishop of Canterbury, Justin Welby, urged the church in an Easter Sunday interview to “disagree gracefully”. Vicky discusses this with hosts Stephen Dixon and Gillian Joseph.

You can watch it below. 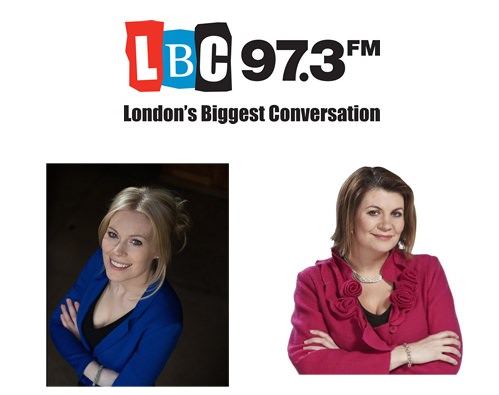 Vicky was a guest on Julia’s show discussing whether religion can and should ever be the brunt of jokes, and why some religions can be laugh at and others can’t.

Listen to the interview on LBC. 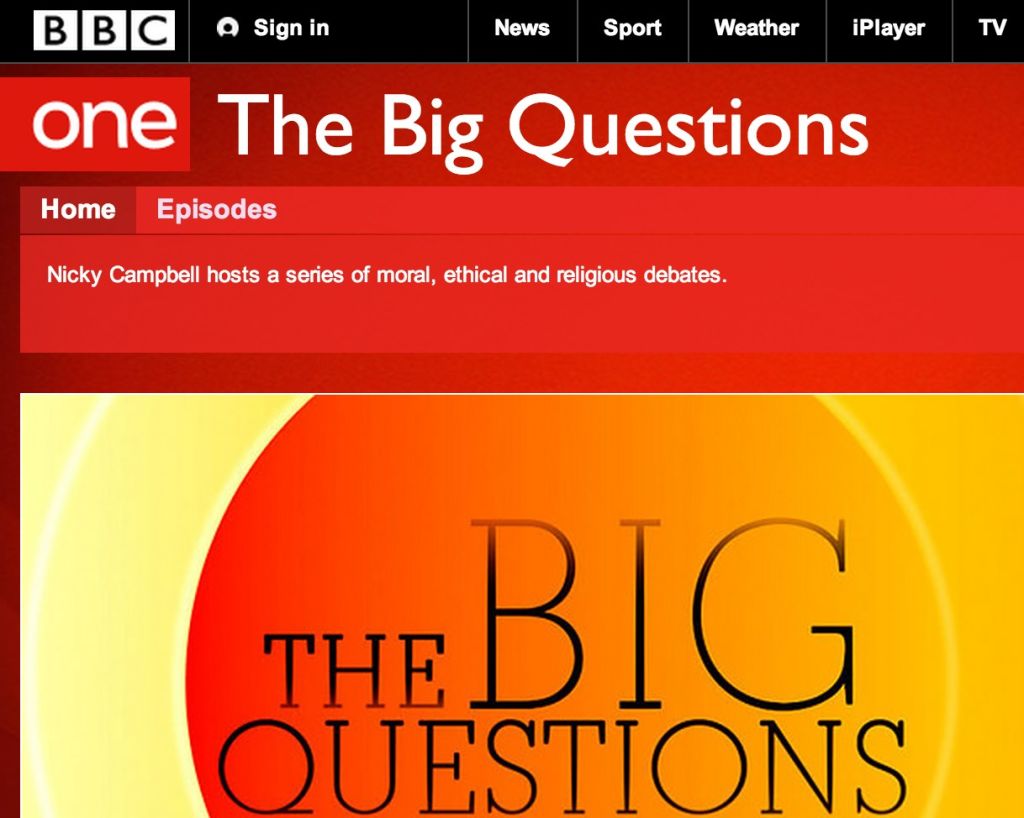 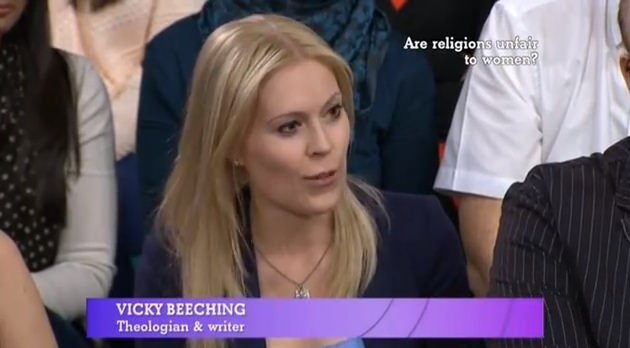 Twice in two weeks, Vicky was a guest on BBC 1’s The Big Questions, airing on May 5th at 10am.

Hosted by Nicky Campbell, the programme debated “Are religions unfair to women?”

You can watch the programme below: 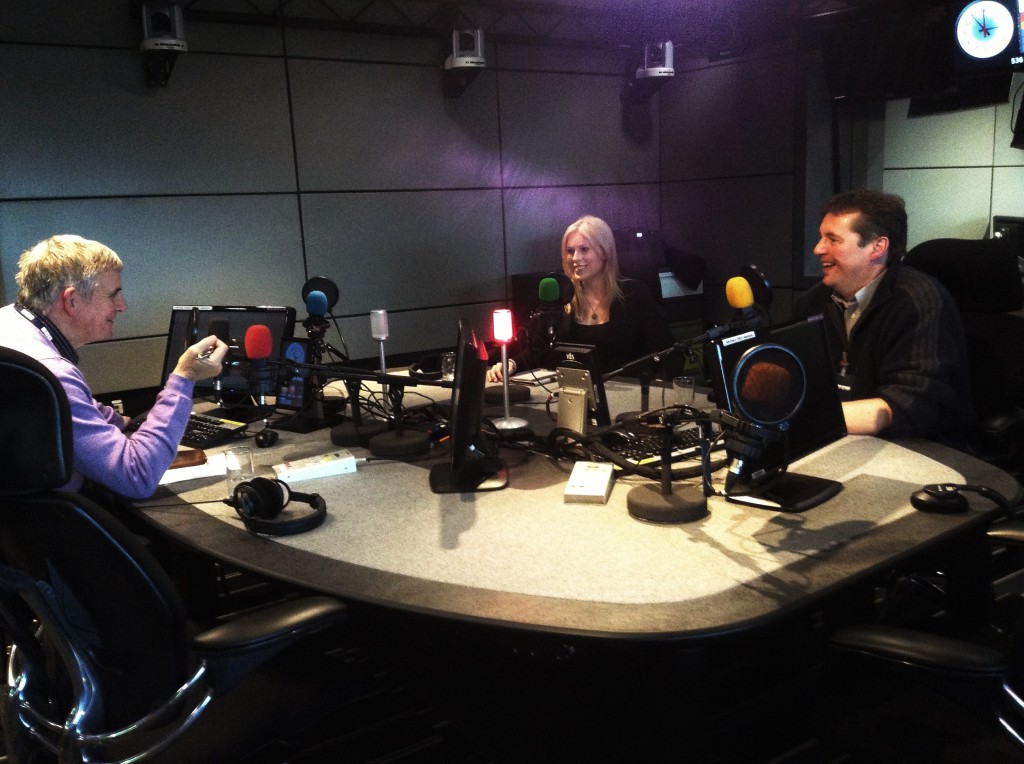 Vicky was one of three panellists on Radio 4’s popular religion and ethics programme Beyond Belief.

The topic of debate was ‘The Future of Evangelical Christianity”.

Listen to this edition of Beyond Belief. 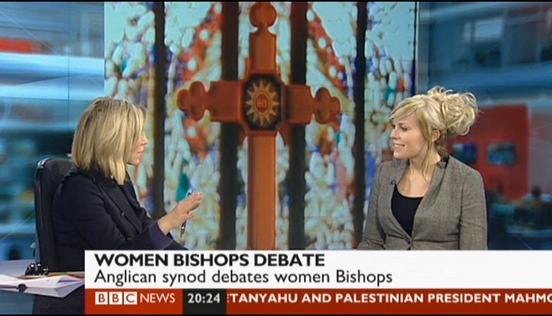 Vicky discussed the Church of England’s forthcoming vote on ‘Women Bishops’ and the social media campaign that she and a few friends co-founded. The campaign, called “Yes2WomenBishops” gained much traction on Twitter, Facebook and through a website that enabled Anglicans to directly contact their General Synod Representative, to encourage them to vote “yes”.

The campaign got coverage in The Telegraph, The Times, The Guardian, The Independent, the Church of England Newspaper and a host of TV networks including BBC News. 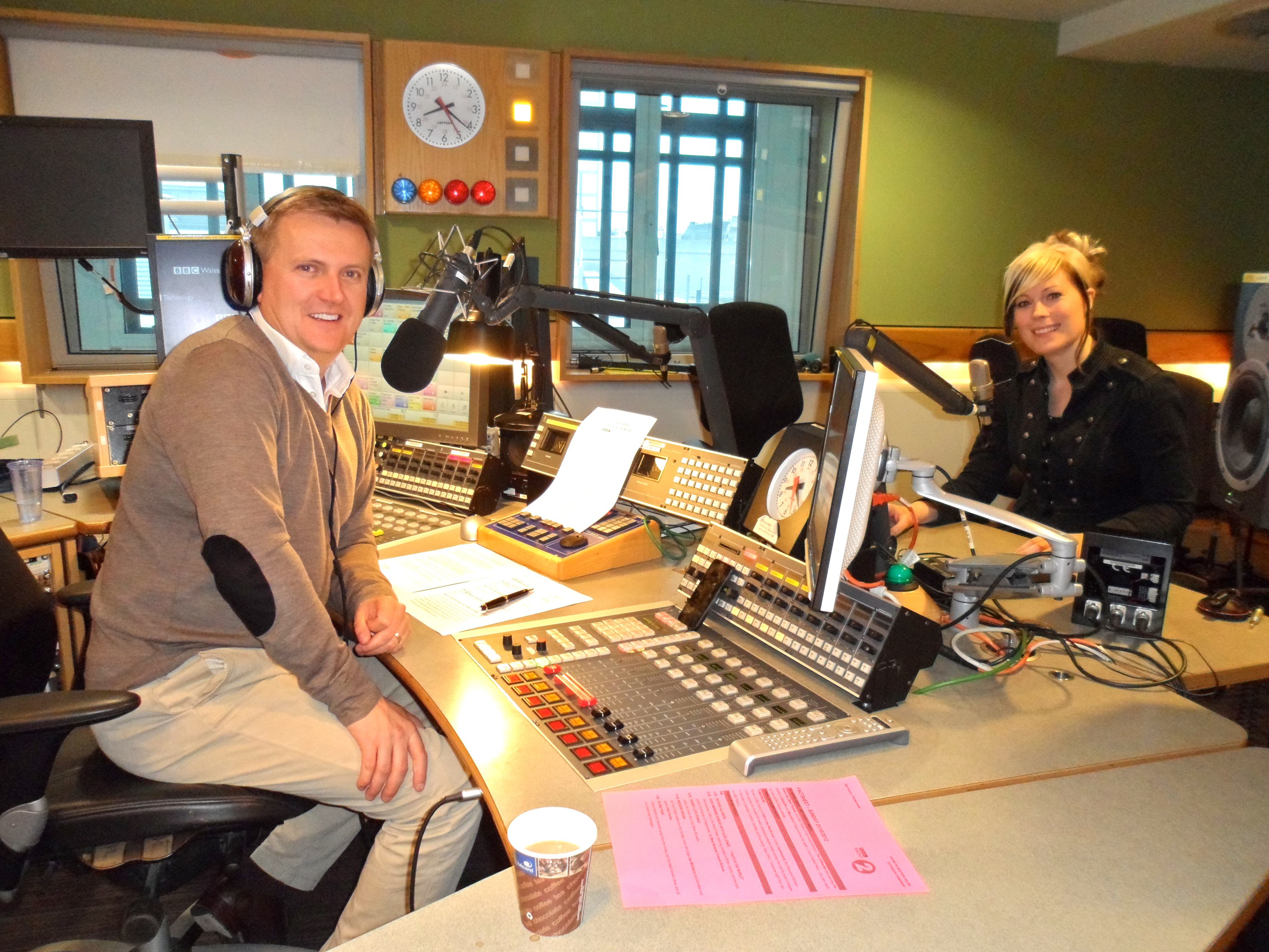 Vicky chatted with Aled about the ethical aspects of social media and how the digital revolution is impacting our morality.

Listen to this edition of Good Morning Sunday. 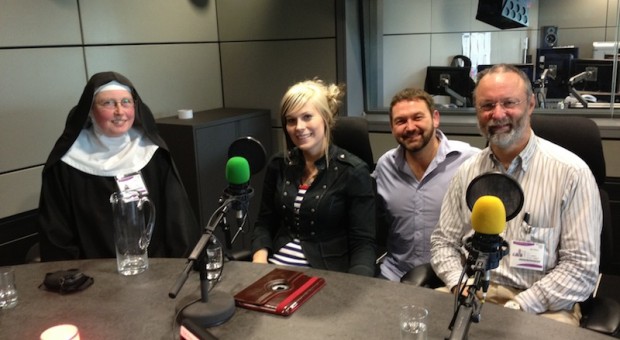 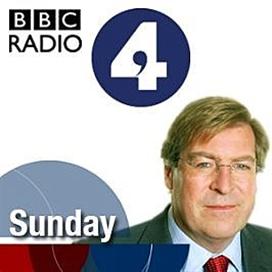 Vicky was a guest on Sunday discussing the ways the internet is shaping the morality of our society.

The two other guests on our hour-long panel led discussion were Bishop Alan Wilson and Benedictine nun, Dame Catherine Wybourne.

Listen to the feature on the Sunday programme.